Animals Around the World Badge 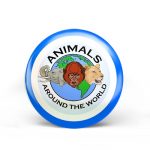 Penguins: Do three requirements including the two starred *

_____ 1.* Learn to identify at least 5 animals that do not live in your part of the world.
_____ 2.* Create a craft or art project that involves animals from around the world.

Otters: Do four requirements including the two starred *

_____ 2.* Choose one category of animals (birds, mammals, reptiles, insects, fish, amphibians) and compare how they differ between at least 3 different countries.

Dolphins: Do five requirements including the two starred *

A great resource for these requirements is Blue Planet Biomes: http://www.blueplanetbiomes.org/world_biomes.htm (third party website). Please get parent’s permission before browsing this website.

Butterflies: Do six requirements including the two starred *

_____ 2.* Choose one animal family and show how it differs around the world. This can be done via essay, booklet, poster, art project, oral presentation, etc. For example, if you chose wildcats, you would need to include the lion, tiger, lynx, cougar, jaguar, snow leopard, etc. There are 36 wildcat species around the world. How do they differ?

Eagles: Do seven requirements including the two starred *

_____ 2.* Make a list of at least 20 animals around the world that are on the endangered species list. What is being done to help save them?

_____ 2.* Teach someone how to do a skill from this badge or teach some knowledge about this badge to someone. You can teach kids, your spouse, seniors, anyone, just as long as you are sharing your new found knowledge. If for some reason you cannot teach what you have learned to someone else, you may choose an additional 2 optional requirements instead.

_____ 3. Visit a zoo that has animals from around the world. If you can’t visit one in person, visit one online with the permission of your parents.

_____ 4. Interact with an animal that is not an everyday house pet. For example, you could:

_____ 5. Participate in a service project that involves our world’s animals. Examples might include:

_____ 6. Find at least 5 animals that are eaten in other parts of the world that are not eaten in the U.S. What are they? Where are they found? How are they prepared? If possible, try some.

_____ 8. Create a map of where endangered species can be found. Include at least 20 different animals. Why are they endangered?

_____ 9. Play a game that involves animals around the world such as Zoo Tycoon 2 or Zooreaka!

_____ 10. Learn about careers regarding animals around the world. Examples might include a wildlife conservationist, photographer, veterinarian, or zookeeper, animal rescue worker, etc. What education and training do you need? What salary can you expect? What hours could you expect to work? Where might you have to live?

_____ 11. With the permission of your parents watch a live action cam online that shows an animal from somewhere in the world. It might be trained on an eagle’s nest, a zoo exhibit, the African wildlife, etc. Watch the cam off and on for at least a week. Share what you saw.

_____ 12. Learn about animal rights and how animals around the world are being harmed and abused by humans such as dolphins being trapped in fishing nets, circus animals being mistreated, overpopulation of dogs and cats, poaching rhinos for their horn, etc. Choose one specific form of abuse and find out what you can do to help stop it. What organizations are there that are trying help? How can people get involved?

Our web pages may provide recommendations and/or links to other digital and/or non-digital resources for the convenience of users. Curiosity Untamed LLC is not responsible for the availability or content of these external sources, nor does Curiosity Untamed LLC endorse, warrant, or guarantee the products, services, or information described or offered at these other digital and/or non-digital resources. Use these resources at your own risk and with a parent’s permission.