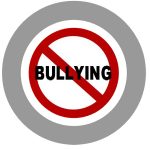 Penguin: Do three requirements including the two starred *


_____ 1.*  Learn what bullying means. Learn good manners such as please and thank you. Discuss how being polite can help avoid bullying.

_____ 2.*  Practice sharing with your friends and learn to wait your turn. Discuss why hitting, biting, shoving, etc. is considered bullying. Practice other, non-violent, ways of dealing with anger and frustration.

Otter: Do four requirements including the two starred *

_____ 2.*  Role play bullying scenarios and ways to deal with bullying. Make a list of adults you can go to if you are the victim of bullying. Examples might include parents, teachers, bus drivers, family members or police.

Dolphin: Do five requirements including the two starred *

_____ 2.*  Cyber bullying has become an epidemic. A simple mean comment, or picture, sent to one person, can now become viral almost instantly. Anything posted online, no matter how private you think it is, always has the potential to become publicly distributed.

Make a list of ways that cyber bullying can occur.
Write an anti-bullying pledge to never post, or repost, an unkind word or picture online, even through a private email or text. Get as many friends as possible to sign it.

Butterfly: Do six requirements including the two starred *

_____ 2.*  Find out the statistics for bullying at your age level. How often does it occur? What type of bullying is most common? Discuss what role you can play to help eliminate bullying.

Eagle: Do seven requirements including the two starred *

_____ 2.*  Find out what anti-bullying legislature has passed both federally, and in your own state. What specific forms of bullying do the laws address? What are the punishments?

_____ 2.*  Teach someone how to do a skill from this badge or teach some knowledge about this badge to someone. You can teach kids, your spouse, seniors, anyone, just as long as you are sharing your new found knowledge. If for some reason you cannot teach what you have learned to someone else, you may choose an additional 2 optional requirements instead.

_____ 5. Make a list of what resources are available to you and your family if you are the victim of bullying.

_____ 6. Gather some friends and make posters about anti-bullying. Ask your school if you can post them on campus, or place them around your community.

_____ 7. Cliques, and excluding others, are another form of bullying. Make an effort to include others in your conversations and activities. Examples might include asking someone new to join you and your friends for lunch; when someone asks if they can play a game with you and friends, tell them yes.

_____ 8. Earn a character badge that will help you stand up to bullying such as the Courage badge, Perseverance badge, or Confidence badge.

_____ 9. Earn a character badge that will help prevent you from bullying others such as the Kindness badge, Respect badge, or Self Control badge.

_____ 10. Participate in a service project that has to do with bullying. Examples might include organizing an anti-bullying rally at your school; creating a website with activities to promote anti-bullying; or performing skits or songs regarding anti-bullying for schools, or youth groups.

_____ 11. Research careers that have to do with anti-bullying. Examples might include teachers, counselors, authors, psychologists, movie production, etc. How does this career address anti-bullying? What type of education would you need to have this career? What type of salary could you expect? What hours might you have to work? Where might you have to live? Butterflies and up only: if possible, shadow someone for a day who works in one of these areas.

_____ 13. Learn what are some common triggers for bullying, such as a feeling of insecurity, anger, frustration with self or others, desire to be thought of as tough, etc. How can you deal with these issues?

_____ 14. Write ANTI-BULLYING down the side of your page and then come up with a word describing anti-bullying actions for each letter. For example: A could stand for Against Aggression, N for . . .

_____ 16. Butterflies and up only: Children who are bullies grow up into adults who bully. What kinds of adult behavior can be considered bullying? What resources are available to help victims?

_____ 17. Butterflies and up only: Research when bullying started becoming a serious problem in schools. Is the rise in bullying correlated with any other social issues? Research trends in bullying.

_____ 18. Bullying can happen at an international level. Find examples in history where nations bullied other nations. What were the results?