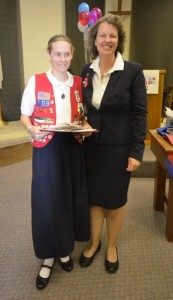 Charlotte Duke (Troop #109 in Hawkins, TX)  holds the honor of being the first Frontier Girl to earn the Diamond Gem Award as well as all 9 Major Awards.  Before graduating, she also earned her Eagle level WOW! Award.  In addition to earning more than 100 badges at the Eagle level, Charlotte has also written several dozen badges over the years for the program as a whole.  She has also spent a lot of time finding resource sites for many of our badges to share with other members.  Charlotte was an integral part of the Frontier Girls program from 2008 until 2014 and corresponded frequently with Frontier Girls headquarters to make contributions and suggestions to the program.  Married and living overseas, Charlotte still writes badges for Frontier Girls when she has the time.   Frontier Girls will be awarding the Charlotte Duke Award on an annual basis to the girl who we feel best follows in Charlotte’s footsteps.

To apply, fill out the application below: