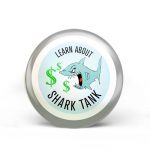 Disclaimer:  This badge is not associated with, nor endorsed by the Shark Tank TV show.

Penguin: Do three requirements including the two starred *

_____2.* Understand the concept of buying and selling things.

Otter: Do four requirements including the two starred *

_____2.* Watch at least 3 different episodes of Shark Tank.  What was your favorite product and why?  If you wanted to go on the show, what would you sell?

Dolphin: Do five requirements including the two starred *

_____2.* Create a timeline for the Shark Tank TV show that begins with the other international shows it was based on.  Include at least 10 items.

Butterfly: Do six requirements including the two starred *

_____2.* Research each of the six main Sharks.  Who are they?  How did they become wealthy investors?  What is their specialty?

Eagle: Do seven requirements including the two starred *

_____2.* Teach someone how to do a skill from this badge or teach some knowledge about this badge to someone. You can teach kids, your spouse, seniors, anyone, just as long as you are sharing your new found knowledge. If for some reason you cannot teach what you have learned to someone else, you may choose an additional 2 optional requirements instead.

_____ 3.  Find out what international versions of Shark Tank are still airing as well as any spin offs that were made.

_____ 4.  Find out the statistics on how many “deals” actually go through the way you see them on TV.  What percentage fail completely off air?  How many get a deal, but maybe not the exact one that was aired?

_____ 5.  Understand “The Shark Tank Effect” and why it occurs.  What is meant by the term “Gold Digger” in regards to show contestants?

_____ 6.  In order to appear on Shark Tank, you can’t be afraid of public speaking.  Create something or choose something from around your house and pretend you just invented it.  Then “pitch” it to a panel of shark judges made up of family and friends.  Did they think it was a good idea?  Did they suggest improvements or changes?  Did they offer you a deal?

_____ 7.  Design a new product or business that you think the world needs.  Then write up a brief business plan.  How you would advertise and market it?  How much would you sell it for?  How would you make it?  Would you need a factory?

_____ 8.  One part of a successful product is packaging.  Create a new package for something you have around the house.  For example a cereal box.  How would you redesign the front and back to make it more appealing?

_____ 9.  Find out who some of the guest Sharks have been and watch one of their episodes if possible.  Why do you think they were chosen to be a guest?

_____ 10.  Research at least 5 different products that got deals on Shark Tank and find out how they are doing today.

_____ 11.  Find out how many awards Shark Tank has been nominated for and how many they have won.

_____ 12.  Role play an episode of Shark Tank with some family or friends.  Have each person design a product and create a “pitch” including a display and logo for your item.  Then take turns being the contestant and the judges.  Give each person a set amount of pretend money to spend on investing in products and businesses that they can split any way they wish.  Whoever ends up with the most money invested in their product got the best “deal”.

_____ 13.  Find out what the most successful Shark Tank product or business has been.  Who did they make a deal with and for what?

_____ 14.  Find out what the application process for the show is and read up and tips and suggestions for those who try out.

_____ 16.  Watch at least 6 episodes of Shark Tank.  Map each investor’s  investing style based on what they invest in. How many total dollars has each invested in total? What types of businesses does each investor like to buy?  What types do they opt of and for what reasons?